Kelly Watanabe is in the running to complete 50 marathons in her 50th birthday year. 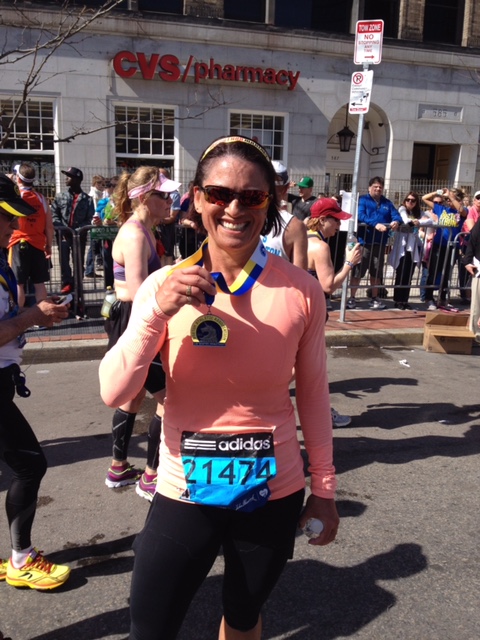 Kelly Watanabe at the Boston Marathon.

While some of us struggle to walk up a flight of stairs, Kelly Watanabe will have run 1,310 miles through all 50 states by June 2016, the year she turns 50. Watanabe is a teacher here at UH Maui College, where she teaches two fitness classes, RIPPED and Zumba, along with courses in management and supervision.

But in her personal life she is a marathon runner. “I don’t actually like to run,” she said. “Racquetball is my fun.” Yet here she is on No. 32, South Carolina, which is also her 37th marathon. Watanabe ran her first marathon in 1999, the Maui Marathon, and then went on to run another in Honolulu that same year. After that, Watanabe had her third child and started running more recreationally. It wasn’t until 2007 that she had the idea of running marathons in all 50 states. She’d just completed the half-marathon of the Maui Marathon and came across a man who said his wife belonged to a club called “The Fifty States Marathon Club,” where they shared the goal of running a marathon in all 50 states.

“I said to a friend: ‘That’s so cool I want to do that!’” Watanabe recalled. “It was just that quick… and I went home to tell my husband.” Her first marathon outside of Hawai‘i was in Arizona in 2008. She went on to complete five other marathons in five additional states that year. The following year wouldn’t be as successful for her, however, as she only ran a marathon in one state. When asked if she thought that she might have given up that year, she said proudly, “I never felt like I stopped. I knew I would come back… don’t ever lose sight of your original goal and don’t be afraid to change it.”

Watanabe is now ready to run in her 33rd and 34th states, Georgia and Maryland, during spring break. 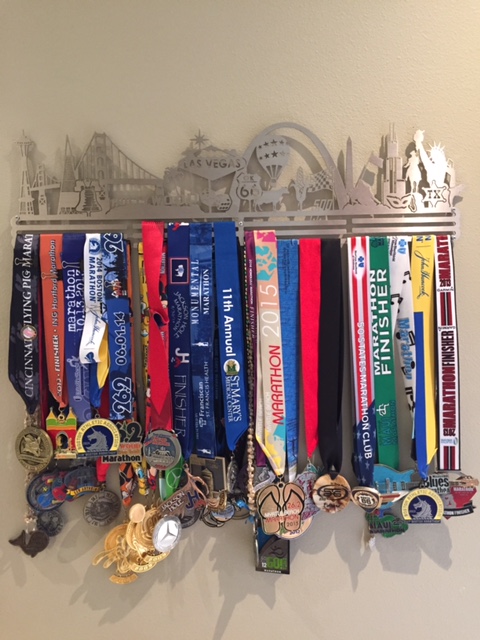 She said her most exciting marathons include the Marine Corps Marathon held in Washington, D.C., the Disney World Marathon in Florida (where runners can take pictures with their favorite Disney characters) and her greatest running achievement, the Boston Marathon, which she ran in 2013 and 2014.

The Boston Marathon requires all participants to qualify by a certain time, Watanabe explained.

“That one was really hard,” she said. “I never, ever thought I would be able to qualify for Boston. At that time, I would have to take a whole hour off of my time. But this was something that I really wanted to do and you think, what if I try and I fail? But you’re a failure if you don’t try.”

So Watanabe prevailed over her own fixed mindset and started training rigorously, starting with her diet. She also began to run more. It took her six months, but all was worth it: She qualified by 11 minutes and before she knew it, she was off to Boston. “I knew I could do the 50 [states], but I never thought I’d qualify for Boston,” Watanabe recalled. “As someone who had never qualified, it was huge.”

Getting through any marathon is never easy, though. “It never gets easier,” she said.

Watanabe credits the people in her life who have supported her quest to accomplish her goals—all 50 of them. Watanabe is a mother of three and has a very supportive husband, along with friends she’s met while running marathons.

While running a marathon in Wyoming, she met other runners who were also planning on running the Indianapolis Marathon later in the year. They invited her to run a “double,” which meant: run Indianapolis, jump in a car and drive four hours to West Virginia and run a second marathon the following day. In West Virginia, she completed a marathon that started at Marshall University, featured in the film “We Are Marshall,” which was based on the true story of the football team’s deadly plane crash. The marathon started in the university’s stadium and went all through campus and past the memorial for the team. “It was beautiful,” she said. Afterward, the group made their way back to Indiana to fly home the next day. Some might be a little hesitant to ride and room-share with strangers, but when you’re meeting people with the same crazy goal, you end up doing some crazy things to accomplish it, said Watanabe.

“Runners are just happy people” she explained. “Having a support system with school or running or whatever helps you maintain focus; it also helps cut out the un-supporters.”

So while you’re spending your spring break binge-watching “How I Met Your Mother” for the eigth time, Kelly Watanabe will be running 26.2 miles—twice—in Georgia and Maryland and will be preparing to run 16 more states in 18 months, finishing her goal the year she turns 50.

More Than a Deli, It’s a Necessity

Innovation, Excellence, Ingenuity and the Environment