On Tuesday, Sept. 29, a passionate group of Haiku residents gathered at the Haiku Community Center for one of Maui County’s 2017 budget meetings. 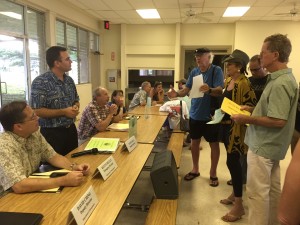 Alexander & Baldwin, Inc.’s land ranging from Kuiaha Bay to Pe‘ahi Point on Maui’s North Shore is up for sale, and many residents—specifically, Haiku residents—showed their support for the county’s purchase of the land. Their goal was to express the importance of having enough money in the 2017 budget to cover the acquisition of this multi-million dollar collection of North Shore properties.

Standing out in particular was a group of West Kuiaha neighbors, led by community member Sandra Florence. “We must protect our coastline and have green space for generations to come,” Florence said. “We have an opportunity as a community to buy it [the land]. And yeah, it’s expensive, but this opportunity only comes once in a lifetime and we have got to find a way to find the money and buy it.”

As soon as the meeting began, an eager Florence and her neighbors rushed over to county Budget Director Sandy Baz, Managing Director Keith Regan and Deputy Director David Ching, who gave the group their undivided attention. Holding green papers with written ideas, the group of residents proposed plans for the future use of the land, granted the county include the purchase price in their budget, which is over $10 million.

“It’s the gift that keeps on giving,” Florence said.

Suggestions such as biking and hiking trails, community gardens and cultural education proposals captivated the county representatives; they nodded in approval at each point the group made.

“More adventurous things need to take place,” said Kayon Shabazz, 22, the youngest member of the group. “This is what we have, you know, it’s our lifestyle—Let’s not lose it, the way we live.”

Being raised on the Mainland and transitioning to Maui as an adult has been a life changing experience, Shabazz said, and he strongly feels that Maui cannot lose its unique lifestyle and communal customs. The group of West Kuiaha neighbors believes that the land from Kuiaha Bay to Pe‘ahi point has the potential to bring the community together.

Maui is definitely known for being an active community for the most part, Lottig said, but the space to partake in these activities are limited. “That lifestyle is so prevalent here,” he said. “But as a whole, there’s not a lot of access.”

Being a surfer, he also hopes that access to the world-famous surf break “Jaws” will be protected, as it attracts tourists and locals alike. Similar to Florence’s group, Lottig believes the land could be used in part for biking trails as well; he regularly ventures to Pe‘ahi Point via bicycle, whether the wave is breaking or not.

When asked about his thoughts of their presentation, Sandy Baz expressed his appreciation for community participation and support for these matters. “We appreciate all of the different input and ideas,” Baz said. Baz said the county has been “actively participating in open space projects” across Maui County, including projects on the West Side and the Paukukalo area.

One specific land purchase of the county’s was the acquisition of Mu‘olea Point in Hana, bought about 10 years ago. Currently, the county is working on creating a contract with Na Mamo o Mu‘olea, a nonprofit that has been assisting the county in the property’s upkeep. With regards to the future a county-owned Pe‘ahi, Baz said that he could see a definite possibility of starting a nonprofit partnership, perhaps, he said, with the Hawaiian Islands Land Trust.

Much of the land, formerly leased to Maui Pineapple Company, is now sitting and up for grabs, with heavy traffic only during large northerly swells. Haiku residents, as well as many residents island-wide, are strongly urging the county to act now, as these properties are surely on the radar of developers.

“It could be a model of a publicly owned piece that raises its own money,” Florence said. “We have really got to understand the importance of long-term planning… buy it now, plan it, make it a productive asset for the community at large and for the government.”

These meetings where county officials and citizens interact have proven to be a great source of information for county budget planning. “We changed our process last year to be more interactive,” Baz told the group. “It makes it so that we all have a better understanding of what your community’s needs are.”

The county’s committee meetings are held at least every other week, according to the events calendar, which is available to the public. For more information, go to www.mauicounty.gov and visit the “Council” page

A View Through the ‘Lens’

What Does UH Maui Know About the 2016 Election