A ‘Tiny’ Solution to a Big Problem

The term “affordable housing” has become more of a fairy tale than a reality. The two words put together are practically an oxymoron. And for Hawaii residents, the cost of living is substantially higher than the American average. It is known as the “paradise tax,” and even though it costs $7 for a gallon of milk, most would say it’s well worth it. It’s no secret that it costs more to live in the islands; according to the Council for Community Economic Research, Hawai‘i’s cost of housing is 161 percent more than the national average. Locals understand that when everything is (literally) shipped here, it’s going to cost more. The question is: could it be possible for the average young professional to live in paradise without having to give up their financial freedom?

“A single family house on Maui is around $300,000 at the cheapest,” said County of Maui Department of Housing and Human Concerns Director Jo-Ann Ridao. “We’ve come to a point in our society where we have to consider alternative living.” Talking specifically about young people returning to the islands after going away for college, she said, “Sometimes they may have to adjust they’re thinking—purchase a condo or try to find higher paying employment. Sometimes parents can help, that happens a lot in Hawaii. I would seriously have them consider living with ‘ohana.”

Living with family is not uncommon in Hawaii, but it is certainly not something most young people would strive for. According to the Realtor Association of Maui, the median price of a condominium in Central Maui area in November 2014 was $262,500, while the median price of a single-family home in the same area was $476,000. Although condominiums can be a slightly less expensive option, a college graduate or young professional isn’t going to have that kind of cash for a very long time.

One possible option that has expanded the affordable housing market in Portland is called Accessory Dwelling Units (ADUs). The American Planning Association defines ADUs as “small, self-contained living units that typically have their own kitchen, bedroom(s), and bathroom space.” ADUs are apartments that can be located within the walls of an existing or newly constructed single-family home or can be an addition to an existing home. They can also be freestanding cottages on the same lot as the principal dwelling unit or a conversion of a garage or barn.

In Hawaii, we have something similar, called ‘ohana units, but there is one important difference. “In Portland, if you build and rent an ‘ohana unit (ADU) as an affordable unit, they wave all the fees associated with construction, it can be upwards of $20,000,” said Ridao. She said she’s learning how officials made it happen in Portland so that Maui might also be able to provide incentives for people to build affordable ‘ohana units.

Although this is a great way for families to earn extra income and to provide affordable rental units, it does not offer a way to buy and own a home. According to the U.S. Census Bureau, 46.6 percent of Hawaii residents pay 35 percent or more of their household income on rent. In 2011, SMS Hawaii released a Hawaii Rental Housing Report that found the fair market rent for a one-bedroom in Maui County was $1,391. To put this into perspective: say a new college graduate with a bachelor’s degree is just starting their new career. They move to Hawai‘i and get a decent one-bedroom apartment for $1,200 plus utilities. The average starting salary for a new college graduate in 2014 is $45,473 (www.careers.washington.edu). That gives $3,789 per month and calculates to $23.68 per hour for a forty-hour workweek. Rent is 31.67 percent of their income, and they still need to factor in electric, water, gas, food, health insurance, student loan repayments, car insurance, a phone bill, leisure activities and savings.

They’re probably not going on a vacation any time soon, but it could be manageable. By the time they’ve paid off all their loans, they’re likely getting ready to settle down and buy a home—the problem is, all their money went to rent and student loans. Now they have to take out an even bigger loan and start all over again. But what if there was a way for a young professional to pay all their bills, own their own home, and have financial freedom? It seems almost impossible these days, but some would say with a little change in America’s ideals of traditional housing it could be attained.

Another option we haven’t discussed yet is the “tiny house.” For those unfamiliar with the term, local blogger and tiny house advocate Erik Blair explains it best. “Tiny Houses are just what the name implies,” he said. “They’re smaller than average and have a lot less of everything that a regular sized home has—except more character and less impact on the environment.” The idea is rapidly growing on the Mainland; it is known as the tiny or small house movement and advocates living simply and sustainably. According to the National Association of Home Builders, the average U.S. home was 2,700 square feet in 2009, almost twice the average 30 years ago. While the size of houses continues to grow, the average number of people per household has decreased by over 76 percent since 1960 and was only 2.54 people per household in 2013 (www.statista.com). The average tiny house is 186 square feet, which means 14.5 tiny houses could fit into a traditional American home.

Your first thought might be: how could someone possibly live in a space that small? With an eight-hour workday, a half hour for lunch, an hour of commuting, and another eight hours sleeping, that only leaves six-and-a-half hours left of the day—all of which is probably not spent at home. A tiny house has everything a person needs to live comfortably; it just has less of it. Every square inch is designed to have a purpose, or multiple purposes. To compensate for less square footage, tiny houses make use of the space that is overlooked in most regular homes. Examples include making use of overhead space by creating a loft as the bedroom portion; using the space under the couch for storage; having a table that folds back into the wall; and even turning the unused toe kick space beneath cabinets into extra drawers.

Tiny houses are most often built on trailers. This offers mobility and also provides a way to get around certain building codes. But even when the trailer is registered with a local DMV, the legality is blurry at best. Since the movement is only about five years old, there are no laws or building codes that specifically apply to tiny houses. On the Mainland, tiny houses on wheels can legally be parked on private property (with the landlord’s permission) or on registered trailer parks. When asked about the possibility of tiny houses on Maui, Ridao said, “I’m not sure yet how that would work, we’d have to change some of our building codes, but I definitely see that happening in the near future.” She went on to explain how the movement may have to start more conventionally, rather than building on trailers, because Maui lacks any sort of trailer park hookups for water and sewage. However, it seems many tiny homeowners have found ways around this by using composting toilets, solar energy and even rainwater catchment systems. Maui’s pristine weather conditions would make it an ideal place for these small homes. 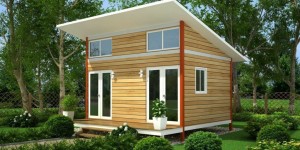 The tiny house movement not only promotes simple and environmentally conscious living, but also financial freedom. According to thetinylife.com, the average tiny house will cost around $23,000 from start to finish, if built by the owner. That’s less expensive than most new cars. Think about what a person could do if they were able to save the money they paid in rent or mortgage every month. Possibilities include being able to travel more; working fewer hours; having a preferred job over the one that makes more money; or even being able to start a business.

Having a small house is certainly not for everyone, but there are a few perks. Less space means less to clean, and less cleaning means more free time. Having a small house also forces people to spend more time outdoors and to be more social. If people can forget the way American society tells them to think—that bigger is better—and when they start to list the things they really need to be happy, they might be surprised. A tiny house is not the answer for everyone, but it might be the answer to some.

A Passion for Music and Celebration