Some know their purpose in life from a young age, while others struggle for years to find it. For Ariel Martin, it just took a few waves and one “nasty” English teacher to spark her passion for helping others.

Being a competitive surfer from age 11, and once the Maui Interscholastic League surf champ, Martin was frequently traveling and occasionally missing school. Because of surfing, she was absent on the day to choose classes for her senior year. In an interesting twist of fate, Martin was forced to take the classes that hadn’t filled up—mostly scientific courses—and to her surprise, she was naturally gifted with the sciences.

“Its actually a good story,” Martin chuckled. “I had the nastiest English teacher, and she was against vaccines, so I wrote a paper about being pro-vaccines.”

To her surprise, she ended up liking it. “Then I decided, maybe I should be a nurse,” she recalled. 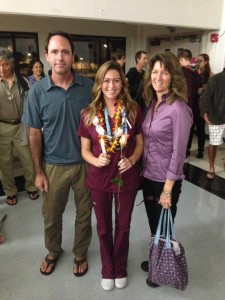 Martin then went on to pursue nursing at UH Maui College. It was necessary for her to get straight A’s to even be considered for the nursing program. She slaved away for two years with prerequisites, all to prepare for an admittance exam.

Admittance to the nursing program, however, was the easy part. Martin now leads a very hectic life. You’ll find her either at school (every day, most weekends included) or at the hospital, working shifts ranging from 8 to 13 hours. And if you still can’t find her, she’s most likely at her other job at Hi-Tech Surf Sports in Kahului.

What drives her to become a nurse?

Everything she learns encourages learn more. Her peers, she says, push her to do better, too. They have created a bond throughout the process of school. “We’re all extremely tough, and we’ve only become tougher together,” she said. “It [nursing school] forces you to grow up.”

However, death has also played a substantial part in Martin’s development—not only as an aspiring nurse, but as a person as well. At the age of 15, she was faced with tragedy beyond her years; first with the deaths of two best friends, and shortly after, her high school sweetheart.

“It was pretty traumatizing,” Martin said. “Death has something strange with me… since it was always so traumatic, it made me really want to make people who are dying feel peaceful.”

In December of 2014, the North Shore community lost one of their beloved “uncles” to cancer, Thomas Ko‘omoa—more affectionately known as “Uncle Tommy.” Martin, being a close friend, was right alongside the family as they dealt with the effects of cancer, and found inspiration from Uncle Tommy’s wife, Aunty Lyn Ko‘omoa.

“Taking care of people is really hard,” Martin said. “When she had to take care of Uncle Tommy and not really have any experience, she was very inspirational. And to see how nursing has helped that family that I know so personally, [it] makes me want to be better for the public.”

Working at the hospital, she is able to do exactly that. “It might not seem like it when you’re talking to me, but I’m very empathetic and compassionate,” Martin said. “I’m very different when I’m in the hospital.”

She describes her compassionate side to be one of her greatest strengths. Along with that, Martin noted that she has excellent time management skills, which is essential to survive the rigorous curriculum of nursing school. Many of her professors have urged her to consider being an ER nurse because of this talent, but Martin has other plans.

She plans to go on and pursue a master’s degree, with the intention of becoming a nurse practitioner. She hopes to have her own practice under a physician, where she will be allowed to prescribe and give advice to her own patients. At some point, she plans to work in hospice as well, hoping to emulate the “magical” experience she had alongside Uncle Tommy.

With all of her current responsibilities and future plans, it’s safe to say that Martin has a lot on her plate. It’s rare for her to have time for herself—and when she does have these precious moments, she takes it back to her roots.

Those moments, rare as they are, keep her sane, and so does her mother’s advice.

“‘Live and let live’…that was from my mom, from the Dalai Lama, or something like that,” she laughed. “That was probably the best piece of advice—or maybe to breathe—you know, it’s really weird that people forget to do that.”

Through it all, Martin persists, determined to get her degree and to continue helping others. After graduation, she hopes to dive right in and begin working—that is, after a well-deserved vacation.

“Don’t do it unless you’re ready to be dedicated 24-plus hours a day, because the nursing program will be awful if you’re not passionate about it,” she said. “And prepare your family and friends, because during those two years, you can’t have any distractions.”