Hōaka Delos Reyes is a talented expert in the field of stone-on-stone carving (kālai pōhaku). Because of his expertise and artistic talent he is often invited to be a cultural advisor, teacher, and lecturer by many organizations and schools. Hōaka is one of the rare people on the planet who can do this type of carving. 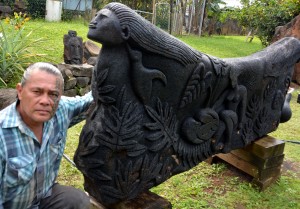 “He ola pōhaku” means “in the stone is life.” The ancient Hawaiians used stones in every part of their lives. Stones were made into fishing lures, weights, game stones, ancient food processors (poi pounders, pestles and mortars), bowls, anchors, ceremonial bowls and many other uses. Stones were used to make heiau (a place of worship), trails, foundations for hales (houses), taro patches, fishponds and for tools.

“He make pōhaku” means “the stone that takes human and animal life.” Stones were used in warfare as weapons were a necessity to ancient cultures, such as sling stones, stone club heads, canoe breakers and other weapons. Weapons were used in killing animals to provide food.

Hōaka’s workshop is a large covered area next to a large yard. The pieces that he works on are huge and cannot be easily moved.

Hōaka grew up on O‘ahu. At 11 years old, his mother died. His father had difficulties with the loss of his wife and was often not present for his son. Hōaka was left to fend for himself on the streets; it was a difficult childhood that taught him many lessons that he now shares with the men that he mentors.

Eventually Hōaka moved to the island of Hawai‘i, where he worked in security. His boss was Maile Souza, who later became his wife. One day, their son came home from school and asked his father to make him a poi pounder without power tools. “It must be done in the old way of stone-on-stone carving,” he said.

Hōaka began talking with the Hawaiian elders to see if anyone knew how to do stone-on-stone carving. A friend told him about George Ka‘elemakule Fujinaga on O‘ahu, who was an expert in this field. Fujinaga refused Hōaka’s initial requests to meet with him. After repeated requests, Fujinaga relented and said, “If Hōaka will come to O‘ahu for one week, I will teach him what it took me 60 years to learn.” 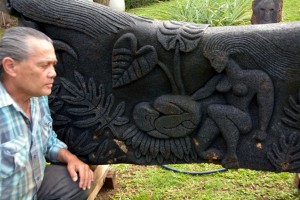 Hōaka went and learned well; the time was intensive and he was Fujinaga’s last student. With this new knowledge, he was able to complete his son’s request for a poi pounder. Fujinaga passed away not long after the training was finished.

Remembering the hardships of his own childhood, Hōaka is passionate about mentoring the next generation of leaders. He shared a story about Kyle Nakanelua, who is the alaka‘i (leader) for the “Hale Mua O Maui.” The Hale Mua, or Men’s House, is a place of identity formation among Kanaka ‘Oiwi Maoli (indigenous Hawaiian) men. The Hale Mua has endeavored to build strong, culturally grounded men that will take up their kuleana (rights and responsibilities) as members of their ‘ohana (families) and the larger lāhui (nation).

The carving that is featured in this article is of the Hawaiian creation story: Papa and Wakea with Ho‘ohōkū‘ka‘lani with her child, Hāloanaka, who died and became the kalo (taro) plant. The carving is huge and has intricate detail.

Papa is on the left end and Wake is on the right end of the stone. Ho‘ohōkū‘ka‘lani, with her buried child, Hāloanaka, and the kalo (taro) plant growing from him, are in the middle of the statue. Hōaka is also pictured and he allowed this carving to be photographed for the first time.

Hōaka has given back to his community by carving and donating several stones for the Veterans’ Memorial and for the Hawaiian burial grounds next to the Ritz-Carlton in Kapalua. He is leaving a legacy of stories carved in stone that will last for centuries.

Now retired, he is selling many of his unique works of art. To learn more, email Hōaka Delos Reyes at limahana@gmail.com.

By Noah Bailey / No Comments