The UH Maui College’s Sustainability Planning Committee sent out a survey to students, faculty, and staff two weeks ago asking for input and ideas on a proposed project for the campus. The proposed campus project is a three-prong approach towards sustainability with a focus on topics such as energy reduction, campus beautification, responsible landscaping, and healthy soils. One of the three prongs of the project is motivated to reduce the energy demand of Ka’a’ike building through improved infrastructure and technologies. The survey asked for ideas on what technologies could be applied. Currently the campus budget is stressed by the large energy bills due to energy demands; reducing the money spent on energy will allow the campus more opportunities to move forward on needed improvements and immediate goals. 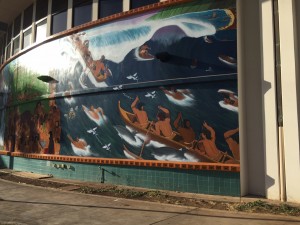 The soil lay barren by the new mural on Ka’a’ike building.

The second prong of the proposed Sustainability Planning Committee’s project is landscaping the lawn in front of Ka’a’ike building where the new mural was painted. Landscaping can provide shade to reduce the heat hitting the building and by consequence, reduce the thermal load and energy required to cool the building. Smart landscaping can also compliment the new mural and offer a beautiful area for students, faculty, and community members to enjoy. The survey asked for ideas about what the landscaping project should include and how it could look. Stakeholder feedback is important to the Sustainability Planning Committee in designing this landscaping project as it is to be functional for the entire campus population.

The third prong of the project is a compliment to the second as well as a design to improve the waste management of the campus: campus composting. The landscaping project will require healthy soils to nourish the trees and plants; whereas, the majority of the campus consists of sandy brackish soils. The campus also has food wastes form the cafeteria and landscaping wastes that can feed into a composting design. The survey asked for composting ideas on how, where, and what ca be included while developing the composting project.

The survey has had more than 50 responses so far. The Sustainability Committee will organize the input and incorporate the suggestions into the planning process as the proposed three prong project moves ahead to the design and evaluation of campus resources stages of development. The overall goal of the project is beyond simply reducing energy, it is to create a venture that improves the campus experience, beauty, and culture on UH Maui College campus.

A View Through the ‘Lens’