A Thought, a Dream, a Vision and Success!

Ho`oulu > News > Campus > A Thought, a Dream, a Vision and Success!

A Thought, a Dream, a Vision and Success!

Can You Find the Hidden Images?

“Kammy” Kaiwi asked his teacher, Michael Takemoto if he could paint a mural for part of his required classwork. “Yes,” said Michael Takemoto. At that time, they did not envision, that the Makahiki mural would end up on the back of the Ka`a`ike building. Their thought grew into a dream, then a vision and now the mural is a complete reality. The mural is certainly an eye stopper with bold vivid colors and large figures. “This mural is a great and wonderful addition to our campus. It shows an important part of the history of Hawaiian culture. It is drawn and painted by our students.” said Takemoto.

“Makahiki” means “year” in Hawaiian, and was a time when all the people rested and abstained from work. It was a time of freedom from labor. It celebrated the harvest and the “akua,” “deity,” Lono who was one of the four main gods of Hawai`i, brought from Tahiti. It is a time to regenerate (fertility and rain) to grow anew. Work and warfare are “kapu,” meaning “forbidden,” in order to allow the unimpeded passage of the image of Lono around the island. The holiday covers four consecutive lunar months from approximately mid-October, when the Pleiades constellation was first observed rising above the horizon at sunset, to February/March. The season is split into three different phases: The mural depicts scenes from the three different phases, of a traditional Makahiki season.

“Phase One” of the Makahiki season begins with Ho’okupu, which is a time of cleansing and making offerings to the akua Lono. The first scene on the mural (starting from the left side), begins at the stone,” “altar”, made out of “pohaku,” “rocks.” It includes the carved wooden pig, the “pua`a,” “symbol of Lono,” where the gifts of the ahupua`a have been collected. A rock ahu marks the corner of each ahupua`a, which is a land division, usually extending from the uplands/mountains to the sea. 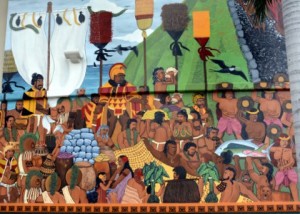 What kind of gifts and offerings do you see? Are there gifts from the sea, from the harvest, and from the forest? There are beautiful handcrafted articles also, like the hala mats.

The festival proceeded in a clockwise circle around the island as the image of Lono was carried by the konohiki. Lono is the fertility akua who causes things to grow and who gave plenty and prosperity to the people. Lono was the akua of peace, rain, culture, hospitality, love and agriculture. He was also the patron of the oppressed and of those seeking refuge.

There are some hidden images in the first phase. Can you find the large “mo`o,” “lizard,” on the mountain? The mo’o is a very important figure, it was the form that the goddess of Moku`ula took, the goddess of the mountain. Do you see the breaching whales?

The shark is considered a sacred animal because it is one of the forms that the `aumakua took. Where is “shark man”? Can you find him? It is a man with a shark tattoo, who would take the form of a shark when in the ocean.

“Phase two,” was after the offerings were collected, was a time of celebration. Among the celebration were hula dancing, chanting, and feasting. The akua of hula is the goddess Laka, sister to Pele. Under her guidance many chants and dances were composed specifically for Makahiki. The beautiful Palipalai fern is behind the hula dancers.

Sliding of sleds on lava rocks, (one of the best-preserved lava sled courses is the Keauhou Holua National Historic Landmark). Who do you see riding the sleds down the lava rocks? One is Kamapua’a, the pig god. The goddess, Pele is in the middle and beside her is a mortal man. 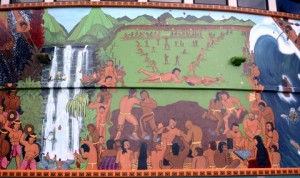 Chiefs and commoners competed, as well as people that were highly trained like athletes. The Warriors took part in sports to stay fit for when warfare resumed. Both men and women participated in the competitions. Some of the sports they participated is were: boxing, wrestling, javelin marksmanship, bowling, surfing, canoe races, relays, and swimming. Do you see Queen Ka`ahumanu surfing? Do you see the flying fish, dolphin, turtle and the monk seal?

Can you find the following games people are playing? “Puhenehene,” a guessing game with pebbles, wrestling, and hula dancing. “Konane” is a form of Hawaiian checkers. “Ulu Maika” is Hawaiian lawn bowling. “Moa Pahe’e” is dart sliding. “Uma” is arm wrestling. “Hukihuki” is Hawaiian tug of war. The mural shows scenes of many of these games. It also shows a multitude of people at the very top of the mural along with the several other deities.

Some of the contests were used not only to keep the warriors fit but also to train the many common folks who might later need to be called into battle. The games helped to develop skills and quick thinking.

All of the tattoos you see on people are authentic tattoo designs. Each one has a story. Why do the women have tattoos on the inside of their legs?

“Phase three” was the “wa`a `auhau,” “canoe.” Once the proper rituals and ceremonies were performed, the chief lifted the kapu on fishing, farming and war. Then a canoe was loaded with ho`okupu and taken out to sea and set adrift. This was a gift to Lono. This scene is on the far upper right-hand corner of the mural. Once the ceremonies were completed, normal life resumed and the farming cycle began again.

“Always be humble and appreciate things that come your way,” said Kammy Kaiwi. 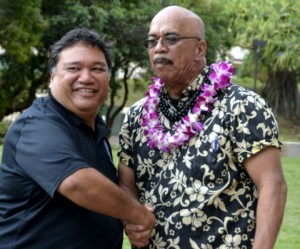 A mural blessing and pupu were provided by Lui Hokoana, Chancellor of UHMC on October 16, 2007. The blessing was given by Roy Newton. This ceremony was to honor the artists who painted the Makahiki Mural. The artists were: Kammy Kaiwi, Michael Takemoto, Mark Olopino, Cris Chong, Mauro Castillo Jr, Malorie Arisumi, James Kahalekai Jr and Kapu Purdy.

December 13, at 4:00 p.m. on the south lawn, behind the Ka`a`ike building, there will be a public blessing for the Makihiki Mural, pupu will follow. Everyone is invited to attend.

Review: Higurashi No Naku Koro Ni (When They Cry)