Many local residents were surprised to find Pacific Whale Foundation charging an entrance fee to the annual festival at Kalama Park that followed the parade on Whale Day Saturday, Feb. 13.

The Pacific Whale Foundation has been putting together a Whale Day festival for Maui’s residents and visitors for the past 36 years. The festival has traditionally offered a day of family fun, food, games and live music. Many families bring coolers, blankets and chairs with the intent of spending the whole day at the festival. Traditionally, this event has been free of charge until this year when Pacific Whale Foundation decided to charge $5 per adult. Children ages 12 and under were free. What surprised people was the almost complete lack of public notification. Publicity for the festival was all over Maui leading up to the event, but many residents and visitors neither saw nor heard any mention of an entrance fee. 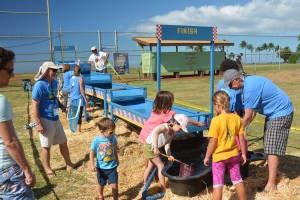 Conversations about this year’s festival change were in full swing as people stood around the big whale statue at Kalama Park waiting for the bus. Some folks were upset with a charge this year while others thought it was a great idea but most people were ambivalent towards the subject.

“We were very excited to be on Maui at the same time as Whale Day,” said Guy Toulle, from Alberta, Canada. He and his wife, Meredith Toulle have visited Maui several times in the past 14 years but their trips never coincided with Whale Day.

“We took the bus,” said Toulle, “because we read there wasn’t going to be parking. That was on the flyer, but nothing about an entrance fee.”

“The fee was not too bad. We didn’t mind. We just didn’t know about it though,” he added.

Local resident and filmmaker Ophelia Hodgson disagreed with Mr. Toulle. She didn’t understand why the Pacific Whale Foundation was charging.

“They already get booth-tent profits from vendors,” Hodgson said, referring to the Foundation’s policy of charging vendors a percentage of their day’s take in profits in exchange for setting up a booth at the festival.

Will Littleton, a 27-year-old Kihei resident, felt the cause was worth it, regardless of any other profit ventures the Pacific Whale Foundation had going on during Whale Day. 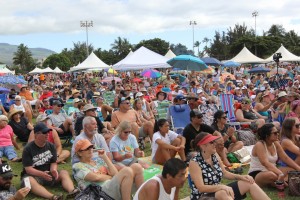 Most people were not fazed by an entrance fee and the turn out for the event had record numbers. People watching live music.

Maui Parks Department employee Jake Guzman has coordinated with the Pacific Whale Foundation to use Kalama Park as the festival’s venue for several years. He is also on hand during the event and thinks a charge has been long overdue.

“It’s a lot of work, both before and after. People don’t know all the stuff to make this happen but, c’mon, you get all these great musicians playing all day and $5 is worth it.” Guzman said, echoing Littleton’s statement.

Alvarado has been the event organizer since the first festival in 1980. “For 35 years, it’s been free and we’ve never made any money; we lose money,” she said.

One aim of the festival is to raise funds for other programs.

“They’re a cruise with a purpose,” said Alvarado.

Pacific Whale Foundation provides tours with an educational slant. They have about 300,000 passengers each year and every staff member aboard their boats is a marine biologist. As the foundation’s development manager, it is Alvarado’s job to find ways to raise funds to meet the cost of operating these whale watch tours.

“Since I put this [Whale Day Festival] on, I get to call the shots. It was completely my decision to have a charge this year,” she said.