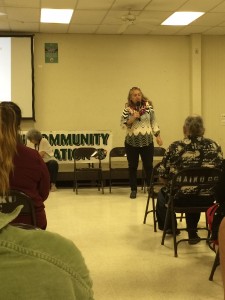 Millions of gallons of East Maui stream waters are diverted every day and controlled through a series of tunnels and ditches by Alexander & Baldwin (A&B). The county Board of Water Supply works with A&B and gives back approximately 5 percent of this water to east Maui residents. A&B recently proposed bill HB2501, which would add an extension to their license of control over east Maui’s stream waters.

Residents in attendance enthusiastically spoke out in opposition of bill HB2501. “Our water is being stolen. From Maliko to Keanai, they take our water… for free!” said longtime East Maui resident Ed Wendt, “They take it from the county and sell it back.”

Lynn Decoite, the representative for East Maui, flew from Oahu to meet with east Maui residents. The meeting was intended for discussion of several local issues, but it was clear that the focus landed on the issue of water. Residents showed that they were extremely passionate about protecting East Maui’s natural streams from further control by A&B.

“I support returning water back to the streams,” said Decoite, “but I cannot just deny the bill.” Rep. Decoite expressed her fear that if she were to directly say no to bill HB2501, she would be removed from further discussion about it on the state community board. Decoite made it clear that she was in great opposition to the bill, but said she had been “kicked out [of discussion] for opposition to similar bills in the past.” Rep. Decoite expressed that she felt she may have more of an impact on the bill if she was able to stay in the discussion and represent East Maui.

But residents sent a clear message back that they wanted her to oppose it directly. Many agreed that she would have more of an impact if she directly opposed the bill instead of staying with it to try and fight it from the inside.

Rep. Decoite listened intently to what the community had to say. Residents expressed that she had to “stop playing games” and oppose the bill with a direct no. Many stated how her opposition would lead other state representatives. to follow her lead.

“The issue does not belong to a state petitioner,” said Nelson Armitage, a member of the Lawful Hawaiian Government. Armitage stated that local people should deal with local issues and that the issue of East Maui’s natural water should not be up to the state or federal government.

Rep. Decoite stated that she is a representative of East Maui and if they wanted her to directly oppose bill HB2501, she would do so. 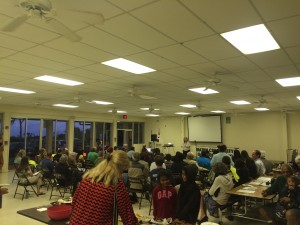 Lucienne De Naie of the Haiku Community Association made statements about the senate committee and how they had the former head of the Department of Land and Natural Resources as a member. “She [Rep. Decoite] understood very clearly what was at stake if the licenses could be extended indefinitely,” said De Naie, “Citizens who live along the streams have to wait years to see the water they are legally entitled to return to the streams.”

The exact capacity of East Maui’s aquifer is unknown. There are hundreds of streams from Hana to Haiku originating on publicly owned land that have been diverted for approximately 100 years. Further development of Central and South Maui is in the works and East Maui is the next water source that is being looked to. East Maui residents have challenged the watershed diversion for being environmentally unsafe. Many are concerned that further development of Maui will lead to further consumption of East Maui natural waters which could potentially lead to extremely harmful effects in the long term.

Bill HB2501 was brought before the Senate on Friday, Feb. 26, and it was scheduled for decision-making on Tuesday, March 1, where it was passed with amendments. It is still uncertain what the amendments are and what the full effect of the bill will be. For more information, visit www.capitol.hawaii.gov and use the bill status search box.

OPINION-Hall Family Preachers on campus cause an upset with in students.

Find Your Voice: A Look Inside a Toastmaster’s Meeting