“All four of us have been here since the beginning,” said Seabury Hall’s Band Director Richie Franco. The event, which attracted a gymnasium full of spectators, celebrated its 5th year at home where it all began. “The first one was here [King Kekaulike]. Usually we rotate since we can never get back here,” said Franco, “but we got lucky this year.” In the past few years, the festival has been held at Kamehameha’s Middle School Gymnasium. 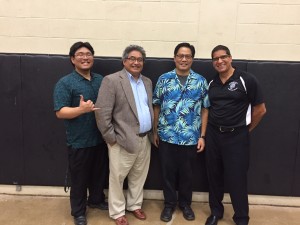 “We had quite a few people this year,” said event coordinator and Na Ali’i band director Casey Nagata. The Upcountry Maui Music Festival began five years ago when Nagata teamed up with band directors Ed Queja from Kalama Intermediate School, Siuai Laufou from Kamehameha Schools Maui and Franco from Seabury Hall. “It was his [Nagata’s] idea,” said Franco. “He made it happen.” Nagata sparked what has become a worthwhile showcase of music in Upcountry Maui.

A strong “1, 2, 3!” kicked off the evening’s showcase, as students from King Kekaulike’s Na Ali’i Band replaced silence with sounds of life and energy. A collaboration of drums and bass erupted and the festival was in full swing. Performing “Tank!” and “Take the ‘A’ Train,” students instantly caught the crowd’s attention. With all eyes glued to the stage, the lime light was passed on to Kalama Intermediate’s Concert Band.

With pieces like “Arikasa” and “The Cave You Fear,” students from Kalama Intermediate pulled the audience into a world of adventure. Much like the classic scenes of an adventurous “Indiana Jones” movie, the audience was placed into an imaginary world full of excitement and thrill. The mixed emotions of fear of the unknown and the joys of triumph portrayed in these pieces could be felt around the gymnasium.

Following the epic movie scene adventure with Kalama Intermediate’s Concert Band came the lighthearted and soothing sounds of Kamehameha School’s Maui Concert Band. “The Water is Wide” and “Portsmouth Overture” made for a perfect ending to an unforgettable trek. These pieces brought a sense of balance and peace to the audience’s epic adventure. However, the journey continued.

Seabury Hall’s Concert Band added to the journey with “1812 Overture,” followed by a surprise piece called the “Nick Jonas Medley.” Arranged by Lauralei Singsank, a student at Seabury Hall, this young and modern piece pulled together several excerpts of well-known songs from singer Nick Jonas that everyone recognized. The band ended with “Into the Storm,” taking the audience for one last journey before the night was through. 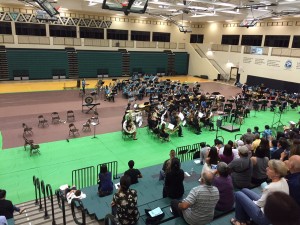 King Kekaulike’s wind ensemble then struck the hearts of many as they performed a piece entitled “Cartoon.” “[It] takes us back to the classic ‘Tom and Jerry’ tunes,” Nagata said. As the ensemble began, smiles immediately engulfed the crowd as they reminisced their favorite cartoon classics. Chuckles spread across the bleachers as kazoos and whistles brought to life the classic Tom and Jerry, Bugs Bunny, and Wile E. Coyote and Road Runner adventures. As the warm comforting feeling of childhood memories swept through the crowd, the ending of a wonderful night drew near.

The four bands united together to end the night as one. Each band director took to the director’s stand and had the pleasure of leading the entire student body in a piece. The night ended with a boom, as students performed Bon Jovi’s classic “Livin’ on a Prayer” as the finale.

Cheering and applause wrapped up yet another successful year for the Upcountry Maui Music Festival. Future concerts will be available in the upcoming months. Be sure to check out Maui Calendar (www.calendarmaui.com) for any further event details.