Love Pasta? Then Check Out the Maui Pasta Company

Love Pasta? Then Check Out the Maui Pasta Company

After a long day of college classes, all you’re thinking about is FOOD. As a student commuting from Lahaina, on daily drive through Waikapu, I’m always passing by the Maui Pasta Company. It’s hard to go unnoticed, especially with its quality reviews but a devastating story.

When the owners of the restaurant, Patricia and Ron Inman, came back from a family visit in Connecticut, Ron became ill. He had eight tumors in his brain. Ron passed away on Feb. 24.

After a long day of classes, my friends and I decided to make the trip to Waikapu. Upon entry just after 3 p.m., we were greeted with a pleasant smile and welcome. We were three hungry college kids, eager to feast on authentic Italian food.

Before entering the restaurant, there was big menu outside that was clearly visible. Their extensive menu consisted of many salads, like the chicken Caesar salad ($6.95) or the mixed organic green salad ($4.95).

You’ll also find classic dishes, such as shrimp scampi ($10.95) or macaroni and cheese ($8.95). The Maui Pasta Company also has a family meal option, including baked ziti ($19.95) and four cheese ravioli ($25.95). The menu continues with hoagies and paninis, at prices that won’t break the bank. The menu finishes off with pizza and stromboli and many side dishes, like mozzarella sticks ($6.95) and garlic bread ($3.25). So picking a dish was definitely a difficult decision. 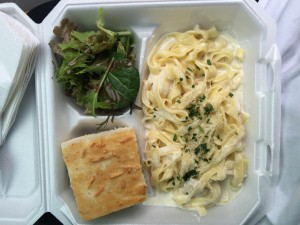 Fettuccini Alfredo with chicken, accompanied by a side of green salad and focaccia bread.

A neat aspect that the Maui Pasta Company offers was a “build your own” pasta option consisting of different pastas and sauces. You name it, they had it. I ordered the fettuccine Alfredo with chicken ($11.75). The plate lunch-style dish came with a side of green salad and focaccia bread. Although the chicken lacked basic taste, the Alfredo sauce soared supreme. The focaccia bread dipped in with the Alfredo sauce was the perfect combination. The fettuccine was authentic and I knew from the first bite that it was made with love. The fettuccine Alfredo with chicken would my go-to pick nine out of 10 times.

On the other hand, my friends had different viewpoints pertaining to the quality of food and service. As someone who isn’t a pasta enthusiast nor too familiar with pasta, Maui Pasta Company, in their opinion, wasn’t worth the price.

My first friend decided to partake in the create your own pasta menu option as well. His order consisted of rigatoni with an Alfredo sauce to accompany it, leading his total to surpass $10, which, in his eyes, seemed absurd. Although it is common for locally made goods to have an inflated price compared to their counterparts, the portion he received did not represent the price. The creation of his pasta wasn’t done, so he decided to add a chicken parmesan, which brought his total to $12.45. The portion of the chicken parmesan was favorable; however, the server did forget the order, claiming, “I didn’t see it.” Thankfully, we ate our food in the limited parking stalls, so the server kindly knocked on our car window and brought the chicken parmesan. Again, the Alfredo sauce was second to none. But as a consumer and with a light budget (and as a financially struggling college student), the chicken parmesan did lack in flavor with its corresponding price point. 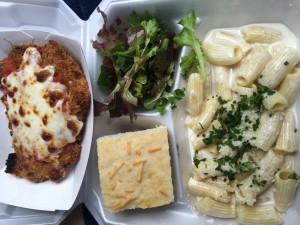 Rigatoni Alfredo with chicken parmesan, accompanied by a side of green salad and focaccia bread.

My second colleague ordered from the classic dish section, narrowing his choice to the pesto lasagna ($9.95). The lasagna portion didn’t fit the price point he was looking for. Although the pesto brightened up the the plate, making it appealing to eat, he got the corner slice, which made it very difficult to eat—to the point where he did not finish it. It was overly cooked cheese. In the end, he was dissatisfied with his meal.

I think in Hawaii we are accustomed to loaded plate lunches for reasonable prices. My friends were disappointed with the amount of food they received, given the prices. But I do back up the Maui Pasta Company due to the quality of food there. It’s not processed food or cheapjack goods; the food at the Maui Pasta Company is made with quality ingredients. The homey atmosphere and food are just two of many reasons people continue to go back.

All in all, Maui Pasta Company does have vast menu options, which I have not tried. With all the options they have, I would highly recommend coming back. In the end, if you want cheap and unhealthy food, then stick to McDonald’s.