Lights, Camera and Plenty of Action at the 2016 Maui Film Festival

Lights, Camera and Plenty of Action at the 2016 Maui Film Festival

The Maui Film Festival has been providing a unique cinema experience for residents and visitors of Maui since its creation in the year 2000. Every year, movie fans eagerly gather at venues in Wailea and at the Maui Arts and Cultural Center to see movie premiers, foreign films, and local documentaries in a casual, laid-back environment. Thousands of attendees gather to lie on the grass under the stars and stick their toes in the sand while they watch a movie premiere on a 50-foot high screen. 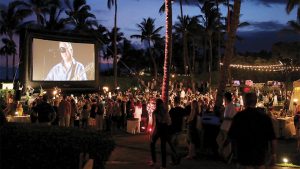 “Literally there is sand between your toes,” said Chatenever, “you can spend the day on the beach and then go see a movie.”

He’s quite right. In June, the award winning Wailea emerald and gold golf courses serve as the festivals Wailea screening grounds. Those in attendance are just a few steps from the ocean shore and get to watch movies with a beautiful sunset view.

Rick Chatenever has been with the Maui Film Festival since before its creation. For many years, he was the entertainment editor at the Maui News and created the Maui Scene. Now he has retired from the Maui News team but still serves as the conduit between the festival and the newspaper. Every year, Rick breaks the story of the festival for The Maui News and interviews celebrities (luminaries as the festival calls them) in front of thousands of audience members.

“I’m not an interviewer who asks ‘what’s your favorite color?’… I want some substance.” said Chatenever. 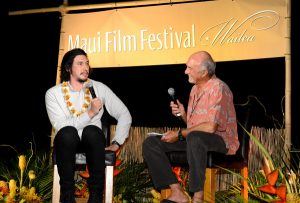 Last year, in 2015, one of the honorees of the festival was Adam Driver (who starred in the new Star Wars film) and Chatenever was the one who interviewed him.

“I met him thirty seconds before we went out.” said Chatenever, “…and it was one of the greatest interviews I have ever had…the two of us instantly clicked.”

Chatenever says he tries to avoid paparazzi and ‘gotcha’ style journalism in his interviews. The approach he takes creates a more casual, conversation-like interview that reflects the atmosphere of Maui and the festival itself.

“It’s sort of mind-blowing for them [celebrities]” said Chatenever, “It’s giving them a relief from that whole paparazzi LA industry…the whole vibe here is just way more laid back.”

When the Maui Film Festival is going on, everyone on Maui has a chance to see movies a month before they open. The Maui Film Festival gives movie fans an alternate option than going to a theater chain and seeing a mainstream, nationwide film. For this reason, the festival has garnered quite a big following.

Currently, about 20,000 to 30,000 people attend the festival each year. To manage the growing amount of attendees, hundreds of people volunteer every year. Keith Raney serves as the volunteer director for the Maui Film Festival.

“I staff approximately 200 to 250 volunteers, half of which are new every year.” said Raney.

Keith Raney says the Celestial Cinema in Wailea is the most challenging venue for the festival and that getting around 10,000 attendees into the seating area requires a lot of guidance and patience.

“That’s why we utilize volunteers.” said Raney, “Their presence provides a comforting atmosphere that buffers the potential of frustration and short tempers.”

Raney has been with the Maui Film Festival since 2001. He says that over the years he has learned the importance of providing organized and detailed information for the volunteers.

“By providing detailed descriptions of volunteer activity, where to report, what we provide…volunteers arrive ready to serve.” said Raney, “This is a big part of why the overall vibe is chill.”

Not only does the Maui Film Festival have a different atmosphere than other film festivals, the awards that are presented to its recipients are different as well.

Attendees get comfy on the grass under the stars for the Celestial Cinema
Credit: Maui Family Magazine

“Standard procedures for film festivals are to give lifetime achievement awards…” said Chatenever.

The Maui Film Festival is anything but standard. In recent years, the film board has been honoring rising stars oftentimes before they have made a career for themselves.

“Two years ago they gave an award to Brie Larson…and here she just won an Oscar.” said Chatenever.

“The awards that they’ve given in the last five years are really interesting because they are uncannily good at spotting Hollywood’s next big thing the moment before they’re the next big thing.”

Recipients of Maui Film Festival awards have gone on to become big names in movies. If someone unknown receives an award, keep an eye out for them because they just may appear in the next movie you see.

The Maui Film Festival provides a unique, intimate film experience to those who live on the island and to those who are visiting it. It has garnered more and more attention each year as word is spread of the laid-back atmosphere that is hard to find at any other film festival.

This year, the Festivals 17th annual event will go from June 15 through 19 and feature films like “Mad Dogs,” “Captain Fantastic” and “Saltwater Buddha.” Passes start at $48 and provide fun for the whole family. There are too many films to list so if you’d like to learn more, go to the festivals website at www.mauifilmfestival.com. If you are interested in volunteering, please visit www.artofvolunteering.com .

Leave a reply to OnurErdogan Click here to cancel the reply

Turtle, Turtle, Come Up to Breathe

A ‘Tiny’ Solution to a Big Problem

Bringing Light Pollution Out of the Dark