“Kubo and the Two Strings”: A Wondrous Spectacle

“Kubo and the Two Strings”: A Wondrous Spectacle 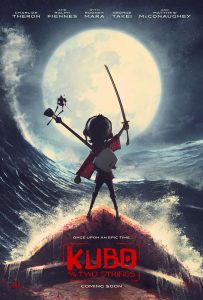 The film is set in mythical Japan where Kubo, a young boy with an eye-patch, takes care of his mother. He supports her by telling stories of a brave hero Hanzo and his magical set of armor.

As he tells his tale villagers gather around to watch origami sculptures magically burst to life. Small, paper samurai battle folded spiders, slicing them in half leaving lifeless paper floating to the ground. But before his epic story is finished it is cut short by the setting sun. He runs home to his mother who tells him to never stay out after dark, warning him if he does his two aunts, her sisters, will come down from the night sky to finish what they started and steal his remaining eye. Little does Kubo know that he himself will embark on the same quest as the mighty Hanzo to collect the magical suit of armor and defeat a mysterious villain who looms in the night. 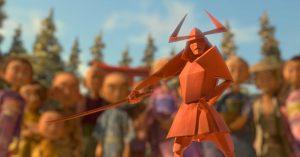 A origami samurai springs magically to life in front of an audience.

Brought to us by LAIKA, the studio known for visually striking stop-motion animation films such as “Coraline” and “The Boxtrolls,” “Kubo and the Two Strings” certainly does not fail to deliver. Every frame is absolutely beautiful and unique from the smallest origami sculpture to the largest temple. Carefully crafted characters are voiced by recognizable stars such as Charlize Theron and Matthew McConaughey who play Monkey and Beetle. The “Star Trek” star George Takei even makes an appearance as the charming character Hosato.

As an audience we have gotten used to the cute, colorful CGI animation of films such as “Finding Dory” and “The Secret Life of Pets”. While those movies are wonderful in their own right, we cannot argue that movies like “Kubo and the Two Strings” are a treat. “Kubo and the Two Strings” is truly a labor of love built on the heart, blood, sweat and tears of the LAIKA team. Stop-motion animation is a rigorous process and a dying art that we see less and less in our theaters. With stop-motion animation dedicated workers are lucky to get 4 seconds of film from a week of shooting. To break that down it takes 24 frames, that’s 24 movements of a puppet, to film one second of stop-motion animation. You would think that type of hard work and dedication would be rewarded but unfortunately that is not the case. According to IMDB “Kubo and the Two Strings” grossed $12,608,372 in the box office on opening weekend as opposed to “The Secret Life of Pets” which grossed $104,352,905.

Not only is “Kubo and the Two Strings” visually incredible, it also has a lessons of life, death, loss, compassion and forgiveness. While life is hard, Kubo presses forward with strength and perseverance. As a storyteller Kubo believes that our story is who we are and as long as our story lives on, we can never be lost.

By Kyle Lane / No Comments