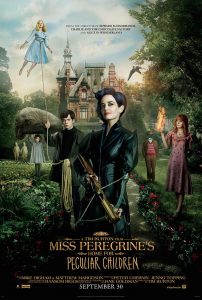 Director Tim Burton has done it again, creating another delightfully creepy and visually striking movie with a touch of silliness in his signature Gothic style. “Miss Peregrine’s Home for Peculiar Children” features magic, action, adventure and oddities that are sure to keep you entertained throughout the movie.

The story begins in suburban Florida where young Jacob Portman suffers the tragic and mysterious loss of his beloved grandfather. Searching for answers in the stories and clues his grandfather left behind, Jacob embarks on a journey to Wales with the hopes of finding the orphanage his grandfather had described so many times in his bedtime stories. When Jacob arrives he discovers that all of the peculiar children his grandfather had described were in fact real. Among these children he meets Bronwyn, a young girl with super strength, Hugh, a boy who has bees living inside him, Olive, a girl who can set fire to anything she touches and Emma, a girl who is lighter than air. Watching over these very special children is Miss Peregine, a woman who is determined to keep these children safe. Jacob finds that his own peculiarity may be the key to saving Miss Peregine and the children from invisible monsters who wish to prey upon them all. 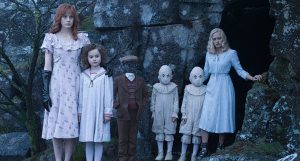 Based on a novel by Ransom Riggs, “Miss Peregrine’s Home for Peculiar Children” was a spectacle of larger than life characters, monsters and scenery. The film featured brilliant performances from a skillfully selected cast. Eva Green and Ella Purnell were especially memorable as characters Miss Alma LeFay Perigrine and Emma Bloom. Cameron King did an exceptional job bringing life and personality to Millard Nullings, a character who was completely invisible. Each peculiar child was charming and unique in their own way, making it easy to connect with their characters. Samuel L. Jackson also delivered a memorable performance as Barron, an evil peculiar obsessed with immortality.

While most of the characters were wonderful, the only one that seemed to fall a little short was the protagonist Jacob played by Asa Butterfield. His character seemed to waver a bit in the beginning but over the course of the film he became more believable. This is definitely a film that starts off a bit slow but continues to build and build to fantastic proportions. By the end, you will be on the edge of your seat.

“Miss Peregrine’s Home for Peculiar Children” has moments that seem like a wink and a nod to Tim Burton fans, reminding the audience of films such as “The Nightmare Before Christmas” and “Mars Attacks.” The film even features a small moment of stop-motion animation which Burton is known for. Favorite actors of Burton’s Johnny Depp and Helena Bonham Carter do not make an appearance in the film but Carter and Green certainly do share a similar look.

“Miss Peregrine’s Home for Peculiar Children” relayed the message that even if you feel just normal if you are open to adventure and your own personal peculiarities anything can be possible. We all have our strengths and weaknesses, and sometimes all it takes is support from others and a little courage to find where we can shine.

“Miss Peregrine’s Home for Peculiar Children” is a wonderful movie that lovers of magic, fantasy and Tim Burton films should definitely go see. The movie just gets better and better as it goes on leaving you glued to the screen. There are moments that will fill you with fear and others that will make you laugh out loud. I wouldn’t recommend bringing small children to see this film because it has moments that are quite disturbing and gruesome. The film is rated PG-13 and is currently playing at Maui Mall Megaplex Cinema. I give this movie 4.5 out of 5 stars.