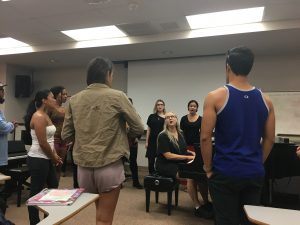 Sarring’s Beginning Vocals class surrounds her for their vocal warm up.

Students and faculty were invited to sit in on the UH Maui College music recitals on Wednesday, Oct. 26 to listen to the music student’s midterm performances. The recitals were held between 9 a.m. and 2:45 p.m. and the performances consisted of piano and vocals.

The event began with beautiful piano performances from students of the piano classes and continued on with vocal performances by the MUS 123 (beginning vocals) and MUS 124 (intermediate vocals) students.

Around noon the beginning vocals class came together to begin their recitals. The class had been split into three small groups and throughout the semester had been working on a group performance for their midterm. The students could choose any songs they wanted and prepared group performances showing off the vocal skills they had learned so far in the class. Along with the individual group performances the class had also prepared a few songs that they all performed together.

Once all the students were present and ready, teacher Karyn Sarring had the whole group come to the front of the room to warm up their vocals. They did an improv vocal warm up with Sarring providing guidance and accompanying them with the grand piano. The audience was invited to join in if they wished, which added a laid-back feeling to the recitals.

Following the warm up, the first group, “M.A.S.H.”, was called up to the front. Sarring accompanied their performance with the piano and one of the students played the ukulele. This group did a mash-up of three different songs: “Falling in love with you” by UB40, “Controlla” by Drake and “Lullaby” by Lateeya. The group showed off their skills in harmonizing and alternated between singing solos and in unison.

The next group to come up was named “Da Jamz & Small Kine Rap.” Again, Sarring accompanied the performance with the piano and students played the ukulele and a cajón. The group sang “Sweet Lady of Waiole” and added in their own original rap verses while playing the cajon. The group seemed to have a lot of fun with their performance and the amount of creativity that was put into it shined through. 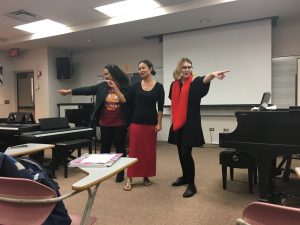 The final group to perform had named themselves, “Kaleo O Kalani.” They sang “Make a Man Out of You” from the Disney movie Mulan. The members of the group wore coordinating red and black outfits. They showed of their skills in harmonies and made the performance very animated with choreography and lots of passion.

Before the beginning vocals recital came to an end, lyric sheets were passed out to the audience to encourage them to sing along with the final songs that the class sang as a whole. Everyone came together to sing well-known songs like “Stand by me” and “Lean on Me.” This added a level of fun for the audience and boosted the confidence of the students performing.

Sarring explained that the class’s next big assignment would be working on their solo performances.  The students will be able to pick any song that they wish and perform it alone for their final.  Following the Beginning Vocals class, the Intermediate Vocals class performed their midterm solos, where each student had prepared a song to sing, showing of their skills and talents.

Sarring’s MUS 123 and MUS 124 classes will be offered again during the Spring 2017 semester, until then the UH Maui College Music Club with be sponsoring multiple upcoming events.  On Nov. 15 from 9 a.m. through 11 a.m. there will be an International Music Improv Workshop held at the campus Multi-Purpose room. Guests are encouraged to bring instruments or to come to sing and dance. By the end of the event the participants will create a collaborative music piece. A couple days later on Nov. 17, from 5 p.m. to 8 p.m. the Music Club with be holding an Open Mic night in the Multi-Purpose room. The event is free and all talents and ages will be welcome.

If you’d like more information on these events, please visit www.maui.hawaii.edu/music/blog or www.facebook.com/musicatuhmauicollege