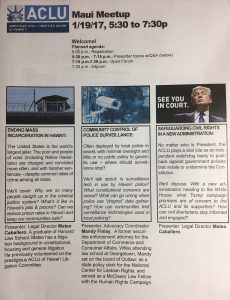 The ACLU civil rights discussion event program, touches on what was discussed.

A civil rights discussion was held by the American Civil Liberties Union(ACLU) of Hawaii on Thursday, January 19at UH Maui College. The free event was open to the public and was held to discuss topics such as safeguarding civil rights in a new administration, community control of police surveillance and ending mass incarceration in Hawaii.   The meeting began at 5:30pm and was co-sponsored by Maui Peace Action and the UH Maui College Department of Human Services. Community members came from all over the island to listen and discuss the planned topics as well as bring up varying topics of their own.

ACLU of Hawaii’s Legal Director Mateo Caballero, Legislative Coordinator Mandy Finlay and Deputy Director Kit Grant came to Maui to present their topics and discuss them with the public. The discussion consisted of three presentations, with the first one discussing the problem of mass incarceration in Hawaii.

A PowerPoint presentation was shown by Caballero to demonstrate various graphs coordinating with the population rates of Hawaii prisons as well as the class of the crime the prisoners have committed. “Mass incarceration is a very complex issue, what’s driving mass incarceration in the US and in Hawaii it’s not a simple matter, it has multiple causes and for that reason it requires a comprehensive solution and that makes it difficult to tackle,” said Caballero, “A major barrier to reform is actually some public misconceptions and myths about the system and about who is in there and for what, so I’m hoping this presentation will dispel some of those myths.” Questions were held until the end of each presentation where there was a designated time for questions to be asked by the audience. 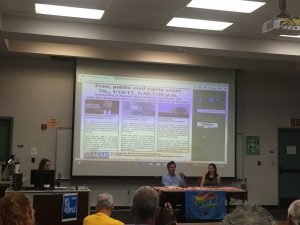 Finlay gave a brief presentation on community control of police surveillance. She shared facts about auto license plate readers, police body cameras and facial recognition; the three main forms of surveillance technology being used on Maui. “Technology does not always work the way it’s supposed to, and even when it does work the way it’s supposed to, it doesn’t always tell us what we think it does,” Finlay said before showing a video of the ways police body cameras can be deceiving. The video showed the view from a body camera of what appeared to be a man attacking the police officer, but when filmed from a different angle it was revealed that the subjects were actually dancing. “We think that because it’s a video we are perceiving what we think is the objective truth, we think this is an objective bystander and that we are viewing it with our own eyes, but we are still so limited by the perspective of the video,” said Finlay. She went on to point out that the footage like the one shown in the video is often submitted as evidence in trials, yet it doesn’t always give a clear picture of what actually happened. 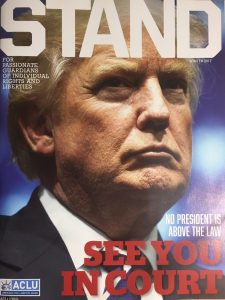 The cover page of the newest addition of the ACLU magazine which was given out at the event.

In the last portion of the discussion Caballero took back to the attention of the audience to discuss safe guarding civil rights in a Trump administration. Caballero prefaced the discussion by stating, “At the ACLU we are non-partisan and so we do not support or oppose specific candidates, we do however comment on their histories and proposed policies.” It was discussed how civil libertarians can stay informed and engaged, and some of the promises Trump has made that concern the ACLU. The discussion was concluded with fifteen minutes of open forum time where the public could ask questions and receive more information.

The ACLU of Hawaii is a private, non-profit, non-partisan organization. Their mission is to uphold and defend the civil liberties granted in the Bill of Rights of the United States Constitution and the extension of those rights granted in the Hawaii State Constitution. They work to ensure that the government does not violate fundamental constitutional rights. In just the past six years they have made some great accomplishments in helping causes such as, LGBTQ equality, equality in education, voting rights, prison conditions and many others. If you would like to learn more about the ACLU of Hawaii and their upcoming events or how to support them, you can visit www.acluhi.org or visit their Facebook page at www.facebook.com/acluhawaii/.

Campus Wellness Hui wants you to get out and walk