Shelly Harris can be found continuing her journey into higher education at UH Maui College where she plans on making her degree worthwhile.

She was born on the Valley Isle, but at 10 years old she moved with her family to the Mainland. Shelly grew up in a hotel family that moved every few years. 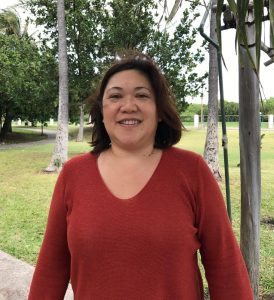 “I spent my most impressionable years in Texas and California,” she said.

By the time she had moved back to the island, it was her senior year of high school.

After graduating from Seabury High School in Makawao, Harris began her career in business and worked in retail management for nearly two decades. Currently, she is taking part in the family business by helping to run The Old Waiuku Inn at Ulupono.

The 10-bedroom bed and breakfast is owned by her parents, and she manages the back-of-the-house details such as revenue management, reservations and billing.

Now, Harris is back in school with a special interest in the legal profession. While she is still keeping her options open, she hopes to see law school in her future.

“At UHMC I would love to see more four-year degrees offered so we don’t have to leave Maui if we choose not to,” she said. “There are so many intelligent kids and people here that cannot afford to go off island.”

Harris stays motivated in her academic career through her children. As a parent of two, she has watched her daughter complete her college degree in fashion design at Marist College in New York last year and will see her son graduate from Kamehameha Schools Maui later this year.

She says that it’s important to be a role model for her children and that returning to school shows it is never too late to finish what you’ve started.

“I had an opportunity to come back after one of those ‘life-changing moments,’” she said, referring to her divorce of more than three years ago.

Harris has been at UHMC since 2013, where she has taken classes in business writing, religion and Hawaiian ethnobotany and has been invited to join the campus chapter of Phi Beta Kappa, the international honors society. Harris is enrolled in Journalism 205, a newswriting class where she is building skills that can be utilized both in her family business and in her academic pursuits.

She views journalism as “the closest thing to unbiased writing or record” a writer can produce. Her beat in the class is renewable energy, which she believes will be increasingly important for the island’s future.

“For Maui, I’m excited to see that we have made more advances in alternative forms of energy and look forward to what is ahead,” Harris said.