Showing her prowess in both martial arts and academic endeavors, Macaraeg won a gold medal at the 2015 Kiffmann Maui Open Taekwondo Championship and was part of an award-winning Baldwin High School team at the 2016 Hawai`i STEM (Science, Technology, Engineering, and Math) Conference.

Her STEM win, with partner Chelsea Kau, was in the field of Program Impact Assessment and was part of a competition held May 6-7 at the Wailea Marriott Resort featuring more 800 students, teachers and scientists from across the state. 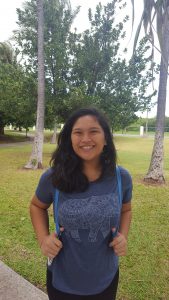 Macaraeg has been a taekwondo practitioner for eight years, earning her black belt last year.  Taekwondo is said to boost self-esteem and confidence by encouraging participants to exercise mental and physical discipline.

It’s easy to see how mastery of this martial art could foster success in other endeavors, like school. Indeed, throughout high school Macaraeg consistently made the honor roll

As a college freshman, Macaraeg is still considering various paths for her academic career. Her initial interest was in psychology.

“I wanted to help those with mental illness (and) increase awareness of the disease and the ongoing need for access to mental health care,” she said.

“As a People to People Student Ambassador participant, I was able to travel to London, Wales and Scotland,” she said.

During her time in Scotland she worked on a community project for the elders of a village. She worked on a peat farm harvesting turf, which is used as a fuel source in some parts of the world. Peat is traditionally used in Scotland’s rural areas for cooking and domestic heating.

Those experiences helped Macaraeg develop a desire to study public policy and pursue a degree in criminal justice or political science. She said this interest was strengthened while working as a campaign volunteer during the 2016 election season.

She also said she saw the need to make America safer by having a more well-informed citizenry.

“Ignorance is the biggest threat to the American people,” Macaraeg said.

As a student in Journalism 205, she will have the opportunity to showcase her analytical and writing skills this semester. Macaraeg also worked in student journalism while at Baldwin High and volunteers at Pu’u Kukui Elementary School with kids interested in news broadcasting. She would like to have multiple articles published in Ho’olu.

Macaraeg, an 18-year-old Maui native, said she is considering law school after earning her bachelor’s degree. She may transfer to a Mainland university to complete her undergraduate studies, with schools in Oregon under top consideration.

taekwondo, Macaraeg also leaves time for fun. She recently attended the Young the Giant concert and describes herself as a typical teenager who’s into “social media, Netflix and hanging out with friends.”

Hawai`i’s case on travel ban to be heard Monday