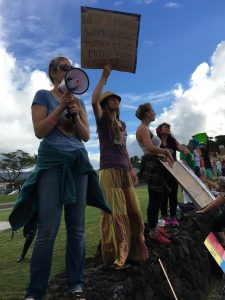 Women chant and hold signs high to stand up for human rights.

On Saturday, January 21, the UH Maui College Great Lawn overflowed with protestors participating in the Women’s March On Washington- Maui Style. Women, men and children marched in solidarity with the large protest in Washington D.C. which attracted an estimated 500,000 people. Sister protests took place not only across the country but around the world to take a stand for human rights. “We are rising for our sisters, our mothers, and our daughters and our selves in one unifying act to show we are only going forward, we will not go back,” said Maui march organizer Robin Pilus as the crowd cheered.

The Women’s March On Washington- Maui Style attracted an estimated crowd of 5,000 people. The sea of people marched up and down Kaahumanu Avenue holding their signs high and chanting. Protesters participated to not only stand up for women’s rights but also to advocate for equal rights for immigrants, all ethnicities and disabilities as well as to show opposition to President Trump.

The Women’s March On Washington is a perfect example of how a large movement can originate from somewhere small, in this case, our own island of Maui. Hana grandmother Teresa Shook first created the event on Facebook following the election. Unhappy with the results, she invited 40 of her friends to march in Washington D.C. to express their frustration. When Shook awoke in the morning, her Facebook event had 10,000 additional names of people interested in participating in the march. Shook never imagined those 10,000 names would turn into an estimated 500,000 people marching in Washington D.C. and over 600 marches around the world.

“I am going to ask you as you march peacefully to reflect upon the reasons you are marching” said Maui march organizer Vergie Cantourna before the march began. Members of the crowd reflected and shared the reasons they attended the march. 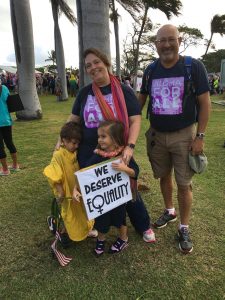 Protestor Gwen Rivera and her family.

“I’m here for a better world for my kids,” said protestor Gwen Rivera holding her twin children, a boy and girl, close. “I want them to have the same opportunities growing up,” Rivera said, “I want them to do all the same things they want to do with their lives.”

“I’m here because I believe in women’s rights, reproductive rights,” said protestor Dayna Puckett, “I believe in a woman’s right to choose and I believe that nobody can tell us what to do with our own bodies.” 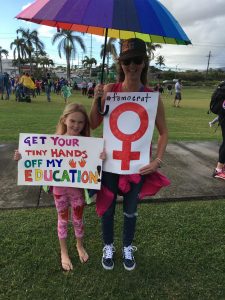 Now that the march is over, protesters have expressed that there is still much more to be done. Passionate individuals will continue their efforts to support human rights and strive for equality. To learn more about the Women’s March On Washington visit www.womensmarch.com or  http://womensmarchmaui.com for the Women’s March On Washington- Maui Style.

By Shanette Kanuha / No Comments