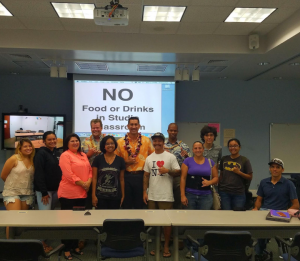 On Wednesday October 18, Senator Kahele (along with two Maui Chairmen) of 1st distract, Hilo visited the UH Maui campus to speak to students and faculty about issues surrounding the university system. As a member of the Committee of Higher Education and first time chair, Senator Kahele wanted to assure that all students could achieve their educational goals and earn their degrees.

Students were able to talk about their concerns, such as classes being cut without enough notice to get into another, the classes that seem that most affected are math, Hawaiiana and Hawaiian Studies, both of which are required in order to graduate from the University. When these issues were brought to his attention, Senator Kahele encouraged students to be vocal about the issue, stating that it should be brought to the attention of the student body president, and to academic advisors. Senator Kahele also states that he has heard this concern statewide, and it is one he will be looking into.

Another issue students face is the lack of training for new professors, a concern brought up by Mariah Martina. Martina states the while professors are obviously trained to teach and have earned their degrees, they are not properly trained on the required text or where things such as light switches and buttons to operate the projector screen are. This leads to less time spent on teaching lessons by professors and more time spent on professors being taught how the classroom is laid out by students.

Martina, also voiced another concern, this one regarding classes once again. This time however, the concern was not on classes being canceled, but classes having to be turned to online courses in the middle of the semester, putting students at a severe disadvantage. In her case, the reason for the change was due to her professor giving birth in the middle of the semester. Martina does not have an issue with the class being online, rather she is confused as to why it was not online from the beginning.

While there are many positives to attending any university in the UH system, Senator Kahele was not concerning himself with those at the time of this discussion panel. All concerns voiced by students were heard, and some were able to answered at the time of the panel. Others, especially those that affect students statewide, were promised to be brought to the attention of the Committee on Higher Education. Hopefully, positive changes will be made from this meeting and the meetings held at all schools in the UH system.

The Origins of Halloween