On February 16th, 2019, Ka‘ahumanu Mall hosted the annual Chinese New Year Festival in Kahului to celebrate The Year of the Boar. The event kicked off with Maui Mayor Mike Victorino and Councilwoman Yuki Lei Sugimura welcoming the community before a lion dance performance and fireworks blessing was done on stage by the Maui Martial Arts Society. The lion dancers split off into the crowd and spectators were encouraged to feed the lion red envelopes sealed with money for good fortune. However, the highlight of the event came from the selection of booths, which consisted of: Chinese foods, Chinese craft vendors, keiki games, Chinese calligraphy, and many others ran by Maui’s community. When asked for a quote by Mayor Victorino while he followed one of the lion dancers around Ka‘ahumanu Mall, he responded with: 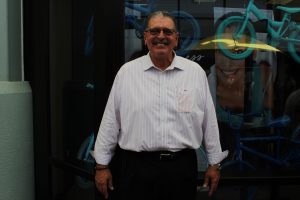 “The Chinese New Year festival is important in teaching the kids here our culture. Chinese culture has been a part of our Hawaiian Culture for over 150 years, and I feel that this year, the year of the pig or boar or whatever you prefer, is going to be a great year for our county. With this community, we are able to keep our culture alive. So I’d like to thank all of the people who participated and worked hard to make this event possible year after year for our island and family.”

The Mayor’s opinion reflected a lot of what the festival circulated around, as the Chinese New Year festival contained a keiki Chinese art contest, keiki Chinese dress up contest, and photos with an ancient lion head for good fortune by the Kwock Hing Society. Local father Ken who was celebrating the festival with his two daughters, Charlotte and Madeline, created a well adorned carriage for the occasion. When asked about his favorite part about the festival, his response was:

“The lion dancing for sure, and more obviously, for my kid’s enjoyment of celebrating the Chinese New Year.” 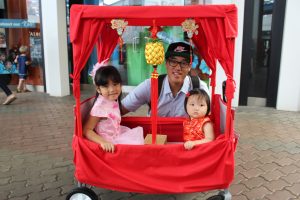 Ka‘ahumanu Mall’s center was filled with many visitors of all ages who colored the area with different shades of red. Red, according to Chinese tradition, is meant for good fortune and to ward off evil spirits. What’s interesting about this year’s festival in Kahului is that the event usually took place at Maui Mall, but was moved to Ka’ahumanu Mall due to remodeling.

By Anissa Casabay / No Comments