The island of Kaho’olawe was used as a bombing range for the United States Military
for decades, starting after the bombing of Pearl Harbor in 1941 and ending in 1990.
Kaho’olawe is a sacred land to Hawaiian natives and is considered to be the physical
incarnation of Kanaloa, the God of the sea. In 1976 an activist group known as the
Protect Kah’oolawe ‘Ohana (PKO) began protests of the bombing which included a
series of occupations of the island. Joyce Kainoa was one of the founding members of
PKO and helped bring national attention to the movement.
Kainoa was born in Hana, Maui in 1946 but called Moloka’i her home. She was a
mother of six and has been described by people who knew her well as “a fierce warrior.”
Joyce became involved with the protests of Kaho’olawe bombing after her cousin
George Helm, along with Kimo Mitchell, disappeared during a visit to the island. She
often called herself a fisherman and used her fishing boat to bring protesters to
Kaho’olawe until it was confiscated by the U.S. Coast Guard. Joyce took part in the
activist group’s seventh trip to Kaho’olawe where she was arrested. Kainoa declined the
posting of her bail and stayed in jail for six months for her refusal to recognize the court
system. 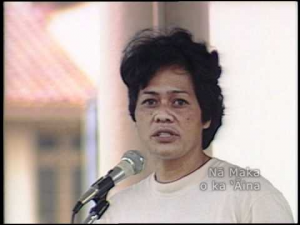 Joyce was described as having a special connection to the land. She lived in a very
remote area on Moloka’i overlooking the Kalaupapa sea cliffs, which are the tallest sea
cliffs in the world. Her property, which she had lived on since the 60’s, was only
accessible by hiking for over seven hours. Every one of Kainoa’s needs, and her
children’s, were met by the land that surrounded them. They hunted, fished and
gathered for their food, grew crops and diverted stream water. Hawaii Supreme Court
Justice Michael Wilson, a friend of Kainoa’s for over 30 years, said of her “Her identity
was so connected to the natural way of Hawaii, the forest and the ocean. She lived with
her ancestors, on a daily basis. But she also was a skilled leader when it came to
understanding and explaining complicated, political issues, and was “comfortable in
both worlds.” Along with her activism towards Kaho’olawe, she also took part in protests
against development on Moloka’i and the diversion of East Maui streams.

“Be in tune with the land, be in tune with nature, to live in harmony
with your neighbors, your friends, your families. We have forgotten
how to care for each other, and it’s very difficult because you cannot
sell it. It comes from the heart.” – Joyce Kainoa

Joyce Kainoa passed away in 2015 at the age of 69. Although she is no longer here in
person, many will agree that her spirit and the inspiration of her actions will live on. She
will be remembered for her time as a fierce activist of the land but also for her presence
as a strong woman with a big heart.

In Memory of Prince Kūhiō

By Aramis Davis / No Comments