On Monday, April 8, there was an event held on the great lawn of the UH Maui Campus commemorating Sexual Assault Awareness Month. The month of April is Sexual Assault Awareness Month as well as National Prevent Child Abuse and Neglect Month, both of which were focused on during this event. This event was put together by Debbi Brown, who is a Title IX coordinator at UHMC, and Nicole Sasaoka from Child and Family Services. Not only did this event bring light to the issues of sexual assault and child abuse, but many services and information were provided to students who attended. 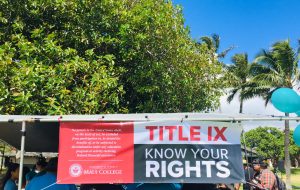 Many organizations had set up booths on the lawn to share important information and to offer support to those who need it. These organizations included Maui Family Support Services, Parents and Children Together, Maui AIDS Foundation, Maui Sexual Assault Center, The Victim/Witness Assistance Division of the Department of the Prosecuting Attorney, and the [Respect] Campaign. Many great services are offered through these organizations such as counseling, STD/STI screening, sex education, assistance in obtaining restraining orders and much more. 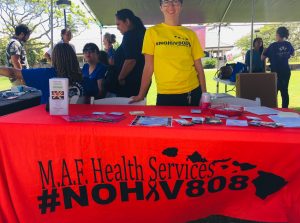 Two films, which centered around sexual assault and the ramifications of such actions, were shown during this event. Both films were made locally. The first film is titled “Shots” and follows the story of two young female college students who went out drinking at a bar, ending with one of the women being sexually assaulted by a fellow student. The second film, titled “Crossing the Line”, shows the trial of this sexual assault case and is said to introduce controversial ideas in regard to sexual assault. 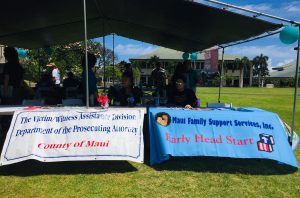 Sexual assault and child abuse are rampant issues in our community here in Hawai’i. It is estimated that 1 in 7 women in Hawai’i have experienced forcible rape in their lives and that 40% of these victims were raped before the age of 18. The statistics on child abuse in Hawai’i are also staggering; each week in Hawai’i 44 children are victims of physical abuse, 36 children are victims of neglect and 11 children are victims of sexual abuse. The abuse that the adults and children in our community are facing are issues that each and every one of us should be concerned with. Both sexual assault and child abuse have been shown to increase the risks of depression, suicide and drug use in these individuals. Events like these are important for reaching out to people in the community who may be experiencing these issues to let them know that they are not alone and that they do have support.

If you or someone you know is experiencing assault, abuse or domestic violence please reach out.

Parents and Children Together

InterVarsity Christian Fellowship Club: A Source Of Strength And Community For All Students.

By Mark Hymbaugh / No Comments

A Look back at 2019: Hawaiian Music Performances on Moloka‘i