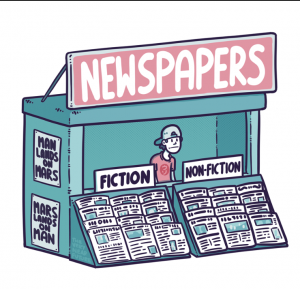 Research shows that readers have difficulty distinguishing between real and fake news sources.

Today, we live in a word where information is readily at our fingertips and often behind a screen. Information online is easy to post, instant to view and can be shared quickly to a wide audience. While this can seem like a great advantage, there are also dangers that arise with the shift to online platforms. One of these dangers is the rise of fake news.

One of the reasons fake news is so dangerous is it often hides under the appearance of a legitimate news organization. Recently, Stanford researchers conducted an 18 month study which evaluated middle school, high school and college students from 12 states and their ability to assess the information they see online. The results were in their words “bleak.” The researchers had hoped middle school students would be able to distinguish an advertisement from a news story, high school students would be able to recognize articles presented by a bias source and college students would look at sources of articles which present only one side of an argument. “But in every case and at every level, we were taken aback by students’ lack of preparation,” said researchers. The data was so alarming that researches stated, “At present, we worry that democracy is threatened by the ease at which disinformation about civic issues is allowed to spread and flourish.”

However, students are not the only culprits of accepting information online at face value and sharing it with others, President-elect Donald Trump himself has quoted statistics from a unreliable news source. During a statement calling for a ban on all Muslims entering the United States, Trump referenced data from The Center for Security Policy (CSP) which stated “25 percent of those polled agreed that violence against Americans here in the United States is justified as a part of the global jihad.” Trump described CSP as “a very highly respected group of people who I know.” The CSP has been widely criticized and has been classified as a hate group by the Southern Poverty Law Center.

The CSP data has since been discredited but the impact the statement made cannot be erased from the large audience that it reached. “The fake news is itself fake,” said Ryan Daniels, professor at UH Maui College, “but when legitimate individuals who we look to for knowledge or information are quoting it, that gives legitimacy to the fake news so more and more people are going to believe it.”

The dangerous reality of fake news became apparent on December 4, 2016 when Edgar Maddison Welch shot a AR-15 assault rifle multiple times in Comet Ping Pong, a Washington D.C. pizzeria. Authorities reported that Welch’s actions were in response to a fake news article claiming a child sex-trafficking ring led by Hillary Clinton was hidden in the pizzeria. Thankfully no one was injured, but this incident gives rise to the question, in a situation like this who is responsible? Welch is now facing federal charges but should the person who wrote the fake news article be held accountable?

Not only is there real danger behind fake news but real money as well. The team at NPR’s Planet Money decided to track one popular fake news story titled “FBI Agents Suspected In Hillary Email Leaks Found Dead In Apparent Murder-Suicide,” which reportedly got 1.6 million views in 10 days, to its source. The story was originally published on the Denver Guardian, a fake news site made to look incredibly professional. Planet Money was able to track the Denver Guardian and several other fake news sites to one person, Jestin Coler. Planet Money interviewed Coler and while he wouldn’t share the exact profits he was making from fake news, he did admit it was around $10,000 to $30,000 a month. The money is made through advertisements that are featured on the fake news sites.

Many significant figures including President Barack Obama have denounced fake news sources. At a news conference in Berlin on November 17, President Obama said “If we are not serious about facts and what’s true and what’s not, and particularly in an age of social media when so many people are getting their information in sound bites and off their phones, if we can’t discriminate between serious arguments and propaganda, then we have problems.”

With seemingly professional fake news so readily available online it is up to the reader to make sure information is accurate before they accept it as the truth. Before passing on information to others, readers can check sources and explore an article to make sure it is truthful and non-biased. Even though an article may confirm an opinion, it does not necessarily make it true. Philosopher Michael Lynch said that the internet is “both the world’s best fact-checker and the world’s best bias confirmer -often at the same time.” Consumers must keep that in mind as we use the internet as a tool while searching for the truth.