A problem that has long vexed scientists – the search for a renewable and economically viable form of jet fuel – will be addressed at the fourth-annual Maui Energy Conference, March 22-24, at the Maui Arts and Cultural Center, conference hosts Maui Economic Development Board and the Maui County Office of Economic Development announced.

Carol Sim, Director of Environmental Affairs for Alaska Airlines, will report on the company’s completion in November of the world’s first commercial flight using a new biofuel made from forest residuals, including “limbs, stumps and branches that are left over after a timber harvest or forest thinning or managed forests on private land,” as described on the airlines’ blog. 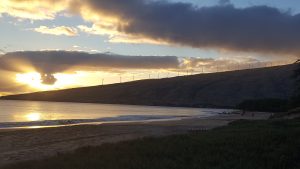 “We have a 2020 sustainability goal to have a commercial supply of alternative fuels at one of our airports,” Sim told AviationPros.com in December. “We’re focused on Sea-Tac (in Washington state) right now since that’s our hometown airport and our largest fuel intake.”

Sim will be part of a panel discussion on innovations in transportation, moderated by Rick Rocheleau of the Hawai`i Natural Energy Institute, set for the afternoon of March 23. Her fellow panelists are Ulupono Initiative’s managing partner Murray Clay, Maui County Councilmember and Pacific Biodiesel vice president Kelly King and Gil Penalosa, founder of Toronto-based 8 80 Cities.

Penalosa, an expert on community planning and urban design, will give the opening keynote address, during the morning of March 22. In an announcement, MEDB and the Office of Economic Development said 8 80 Cities is internationally recognized because of its unique vision, “if you create a city for an 8-year- old and 80-year-old, it will be great for all people.”

“There are so many ways that the physical infrastructure around us influences our energy choices,” said Jonathan Koehn, a member of conference’s program committee, in a press release last week. Koehn, an official with the City of Boulder, Colo., will introduce Penalosa.

A discussion on the correlation between food production and energy production will follow Penalosa’s speech.

A new feature of this year’s conference will be a panel discussion on nuclear energy, moderated by Gavin Bade, associate editor of Utility Dive, during the afternoon of March 22. The conference program says the panel will “present a critical discussion to address community concerns and fears regarding nuclear energy.”

The U.S. Nuclear Regulatory Commission website says there are no nuclear reactors currently operating in Hawai`i.  The state constitution says, “No nuclear fission power plant shall be constructed or radioactive material disposed of in the State without the prior approval by a two-thirds vote in each house of the legislature.”

The conference will report on the world’s largest second-use battery-storage facility during the morning of March 23. The facility, operated by Mercedes-Benz in Germany, repurposes used electric-vehicle batteries for energy storage generated by a renewable source.

Rocheleau will join his Hawai`i Natural Energy Institute colleagues Jay Griffin and Leon Roose to provide an update on Hawai`i’s “grid resiliency” as the state strives to meet its ambitious goal of 100-percent renewable energy by 2045. The discussion will be moderated by consultant Bash Nola during the afternoon of March 23.