Part 1 of 3 stories in our “Renewable Energy of Maui” series.

Maui Electric Co. and Maui Tomorrow, the environmental group that’s often been at odds with the utility, jointly hosted a community discussion with several dozen residents on campus on Feb. 9 touting efforts to promote solar, wind and other forms of renewable energy in Maui County.

MECO President Sharon Suzuki and four of her colleagues discussed the utility’s plan to reach a 100-percent renewable energy goal by 2045, consistent with a State of Hawai`i mandate. Suzuki’s team has targeted Moloka`i to be the first island in the county to have a modernized electrical grid, fully operational and sustained by renewable energy by 2020, with Lana`i following by 2030 and Maui by as early as 2040.

“We’re really proud to be co-hosting this event with Maui Tomorrow,” said Suzuki, after being introduced by Maui Tomorrow executive director Albert Perez. “We’ve really made a lot of progress in terms of coming together and collaborating with Maui Tomorrow to host something like this.”

Each island is projected to generate and supply energy for its own residents, MECO representatives said. The concept of underwater cables connecting the islands is no longer viable, they said.

As the transition from fossil fuels to clean energy occurs, MECO understands it must do so in a cost-effective way and make it affordable for customers, said the company’s representatives.

“We want to be able to adjust our plans as cost and technology change over time,” said Todd Kanja, general manager of system planning for Hawaiian Electric Co., MECO’s sister company. “Flexibility is a really important part of that.” 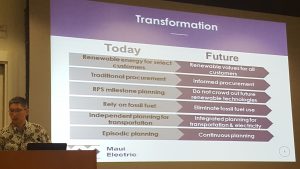 “Whatever we do, we want to ensure we do not crowd out future renewable technologies that may be better and more cost-effective as time goes by.” Kanja said.

After an opening presentation, the meeting was dedicated to questions to the panel of MECO representatives posed by Perez, Maui Tomorrow vice president Doug McLeod and members of the audience.

In response to a question about MECO’s continued use of diesel generators, Kanja said Maui County doesn’t have an immediate renewable source of energy or the infrastructure to replace what was previously provided by the recently closed Pu`unene Mill. The state’s last operating sugar mill had produced a renewable form of energy from leftover sugar cane fiber known as bagasse.

Kanja and McNeff said the use of diesel generators, which don’t operate on renewable energy, is meant to be a temporary solution.

Some in the audience expressed concerns about consumer costs and environmental impacts. MECO officials acknowledged the initial investment in solar and wind energy will result in rising prices for MECO customers. But they said rates will stabilize and be predictable.

Ecological benefit was the primary basis for the state’s renewable-energy mandate. But even clean-energy production brings some negative environmental impacts – such as those related to developing and transporting turbines and battery disposal – which must be mitigated, the MECO representatives said.

The discussion on the state’s transition to renewable energy continues at the Maui Energy Conference, which will include speeches and panel discussions on March 22-23 at the Maui Arts and Cultural Center and mobile tours on March 24.