“Revealing Rapa Nui’s Mysterious Past: The Statues that Walked”

On Thursday, Feburary 23, students, faculty and members of the community gathered in the Pilina Multi-Purpose Room for a special guest lecture by Dr. Terry L. Hunt, Dean and Professor of Anthropology, at Robert D. Clark Honors College, University of Oregon. Sponsored by the UH Maui College Anthropology Club, the lecture, titled “Revealing Rapa Nui’s Mysterious Past: The Statues that Walked,” discussed misconceptions about Rapa Nui’s history as well as the discovery of how the famous Rapa Nui statues known as Moai were transported across the island. 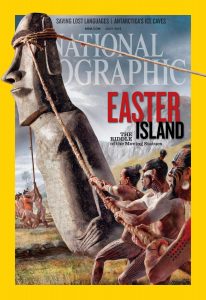 National Geographic July 2012 Cover featuring discovery on how the Moai were “walked.”

Rapa Nui, also known as Easter Island, is a remote island located in the South Pacific which is roughly 64 square miles in size, about half the size of the island of Lanai. Prior to the research done by Dr. Hunt and his research partner Carl Lipo, the common understanding of Rapa Nui was a sad tale of over population, war and depletion of natural resources. Jared Diamond’s book “Collapse” labeled the history of Rapa Nui “ecocide” stating that the people of Rapa Nui and their obsession with the Moai, which he called “Moai Madness,” caused the culture to essentially destroy itself. Diamond stated that the last trees of Rapa Nui were cut down to transport hundreds of the enormous Moai, leading to complete deforestation and the downfall of the culture prior to European contact.

However, when Hunt and Lipo began their research on Rapa Nui in 2001, a completely different story emerged. They found that when the first colonizers settled on Rapa Nui, they brought with them the pacific rat. This rat was fond of the palm nuts which were the seeds of the islands most abundant resource, the giant palm tree. These trees take 50-100 years to mature, so as the rats consumed the nuts they prevented the growth of the next generation of palms. As land was cleared for agriculture, very few new palms grew, resulting in deforestation which took about 500 years to occur. During this time, Rapa Nui transformed into an agricultural society with a sustainable environment. So where does this idea of “ecocide” come from?

“What this is, is that ecocide has become popular and it’s one reason that we are aware of the island but it was a near genocide that occurred,” said Hunt, “and the sad and ironic thing is that the victims of this cultural extermination and this physical extermination have been charged as the perpetrators of their own demise.”

When conducting research on Rapa Nui, Hunt and Lipo studied Moai found along the ancient roads and discovered they had a different shape than the finished Moai presented around the island. The statues had a much wider base, a 14 degree forward lean and the eye sockets are not carved. With this new information, Hunt and Lipo concluded that the statues were walked upright, not rolled on their backs using tree logs as others had previously thought.

National Geographic and “Nova” heard about their research and wanted to do a TV documentary featuring a demonstration on how the Moai were moved. An exact replica of a Moai was created, which stood 10 feet high and weighed 5 tons. After many attempts with the replica, they were able to successfully walk the statue forward, rocking it back and forth using three ropes, and 18 people.

“When you asked the islanders how they moved the statues the simple answer is, they walked,” said Hunt. “They just say, they walked and we felt like they were telling us the right answer all along and that many people weren’t hearing the right answer because they had their own preconceptions.” 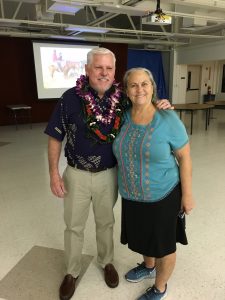 “I think the story here is that this is a very different view of Rapa Nui. It’s not the view of collapse, it’s not the view of recklessness, it’s a view of sheer ingenuity, it’s a view of an island that created sustainable life on the island and it is an island where really a lie has been told for a long time and it’s been really humbling to be part of disentangling that and really bringing back this great story.”